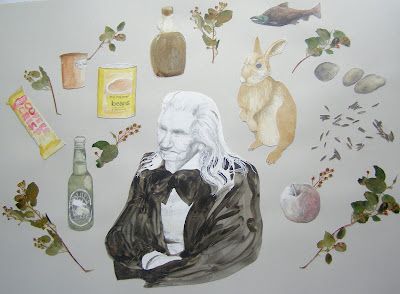 This piece is titled Chief Dan George and the Great Canadian Food Group, and it was done for a cafe and gallery space called NACO (owned by a friend of mine on Dundas near Landsdowne in Toronto, Canada). Julian the owner is having an opening celebration and has asked a number of artists (Norma Reyes, Imm-Living, Sebastian Calleros, Rita Camacho, Jesus Mora and myself) to show works that speak about the idea of Food.

I just finished this piece wednesday the 15th of April. It's my most recent, and luckily for me people seem to be responding well to it. Yay! Thanks, guys. You have no idea how much I appreciate your support. It's so essential to get feedback on what you're doing; positive and negative, it's really important.

Food is one of those amazing things that can reach you and teach you unconsciously so much about a culture and it's identity; what people eat, the way they eat, how they celebrate their food, and all the other choices that go into the preparation and consumption of food. I was curious to identify what, among all our disparate national identities, could be called "Canadian Food". We sometimes see that on tacky restaurant walls WE SERVE CANADIAN FOOD, like it's a national dish. But our dishes come from so many sources, it's difficult to pick items that can be uniquely identified as Canadian.

I thought about the first culture here on our land, the first diet, ha! the First Nations diet, and the way some communities are trying to return to a more traditional food lifestyle for better health and welfare. Interesting. And I wondered how a person might feel, someone who'd been a witness to the changing food and culture of Canada. I'd been reading about Chief Dan George in my Canadian history textbook, and had just re-read his Lament for Confederation. (You should read about it here.) He's someone who spent some time in the limelight (a Canadian icon whether the world recognizes it or not), with a foot in both worlds. I'm not sure if he liked labels much, but he sure liked to play with them. Born in 1899 and dead in 1981, he's a political figure, a rebel, an Elder, a movie star, an "Indian" several times over, an officer of the Order of Canada, and he's a man who demonstrates the gorgeous complexity of our own cultural heritage.
Posted by Erin Candela at 5:29 AM