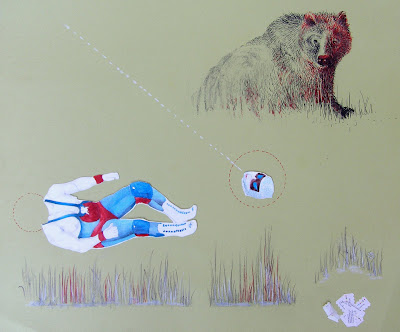 Wrestler and Bear I: Graphite, ink, pencil crayon and paper collage.
Dedicated to Sandy and Sylvain Dumais in honour of a great and
everlasting friendship.

Wrestler and Bear I is, hopefully, one of a series to come featuring wrestlers, maybe loggers, couriers de bois and other manly types in various poses of death and de-construction, in conjunction with bloody(-ish) bears and/or other wild animals of the Canadian wilderness. It's supposed to be funny, so go ahead and don't feel sorry for the wrestler. I don't. He was obviously one of those guys who likes to feel macho by going into the bush and doing weird things with the animals. There are so many people who when they get into contact with wild animals, start off the relationship dynamic dangerously by behaving badly and/or inviting rather more intimacy than they should. I'm not talking about anything sexual here (that would be really weird); I'm thinking more along the lines of those people who try to pet baby bear cubs, or start smearing their kids or their hands in honey and waving them out the window.

What kind of books they've been reading I have no idea. They've probably been spending too much time on the internet or maybe their reality is disproportionately influenced by animated movies. Anyway, growing up in a small northern(ish) town, one hears some ridiculous and some horrific stories about people and their encounters with the wild life. I once heard the story (supposedly true) about a German tourist who had such a romanticized belief of the North, that he outfitted himself in delux moccasins and a custom-made full-body leather-fringed outfit. (He basically just walked into the forest one day and got lost on a mountain somewhere. It's inevitable that anywhere you have isolated towns, you will hear about tourists and even local people getting lost or stuck on cliffs from time to time. This guy had to be airlifted out with a helicopter. I really wonder sometimes what people think they're going to find out there. Not to be too cynical, but mosquitoes, dense underbrush and pointy trees are not neccessarily the path to salvation that some would like to believe. In fact that path can be more difficult to travel than most.)

Obviously there's a male themed experience happening in this proposed series, and just to be fair if I find something equally interesting regarding certain stereotypes of the feminine, I may persue that as well. I don't like to be biased. This is the first one, however, and as you may have read above, it is dedicated to two very good friends of mine, Photographer Sylvain Dumais, and Graphic Designer and creative genius Sandra Dumais (nee MacMillan).

I did the drawing originally on the occassion of Mr. Dumais' birthday (happily dedicated to them both), but having never actually passed along the piece, and in discussing it now I feel that it could be even more appropriate to pay tribute to them here...especially given that they will be leaving the city before the end of summer. I'm sad and torn by the news that they are moving. Part of me is excited for them as they'll be leaving for Montreal, one of the most beautiful and inspiring cities I know. I'll be visiting them there often, I'm sure. But, the loss of their presence in Toronto is heavy and will undoubtably change my impression of this place. Toronto's art and design community misjudged badly when it didn't support these two amazing artists.

Now Montreal is receiving them with open arms and golden crowns, and I wish them all the best in their future projects (personal as well as proffessional). To check out the work of Sandra Dumais and Sylvain Dumais, please click on their names in this sentence and a link will take you to their respective sites. Bon voyages mes chers amis! Je vous aimes tellement fort et je vous souhaite le bonheur et des belles aventures! xxxxxxxxxec
Posted by Erin Candela at 1:03 PM