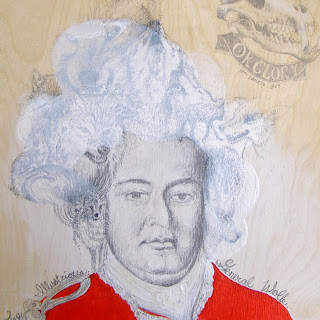 
Hey! Have a look at a drawing I just submitted to the Square Foot show at AWOL gallery today.  It's part of a series (yet to be completed) called The Illustrious. It's featuring famous Canadians with fabulous names. For example, here you have General Wolfe...and what is that hanging about his head? ha ha! Watch for more to come...I've been thinking of a few people who need drawing: Michael J FOX, Marilyn BELL, Bobby ORR, Douglas CARDINAL and so many more. If you think of anyone with a particularly drawable name, let me know. xx e

ps. See that wolf skull in the upper right corner. Apparently, General Wolf had a regiment named after him at death, the 17th Lancers. Their badge, which i found kind of cool, is a skull and crossbones. I've adapted it a bit for the drawing. :) e
Posted by Erin Candela at 6:04 PM